The Access and Quality Education Project now covers 20 most disaster affected villages of Golaghat district in Northern Assam mainly populated by the Mishing tribal community, Schedule Caste (SC) and other backward caste population. The Mishing are an ethnic group inhabiting the districts of Dhemaji, North Lakhimpur, Sonitpur, Tinsukia, Dibrugarh, Sibsagar, Jorhat and Golaghat of Assam. They are the second largest tribal group in North-East India, followed by the Bodo’s. Traditionally they live on both side of the bank of river Brahmaputra.
The traditional joint family dwelling system is most predominant among the Mishing people based on patrilineal and patrilocal system.

Cultivation is the primary occupation of the Mishing Community. The average land holding of the individual families of the villages are 7 hectares of arable land. Geomorphic and anthropogenic flood and erosion have robbed the Mishing of their land and property. Once very rich land lords have been reduced to landless by frequent waves of flood and erosion. Destiny has forced some Mishing families to reside on the river embankment permanently. The economic condition of almost all the Mishing families in the Project area is now very poor. The initial implementation of the project in 2009, somehow reduced the dropouts in the project schools and however in some of the other schools in the project area. But not in all the schools. Still in 50% of the school, the issue of dropouts has to be address in the project area.

The project area had 22 venture schools which are run by community. These schools are plagued by a host of problems such as lack of basic physical infrastructure, lack of trained teachers, lack of adequate school infrastructure, lack of adequate Teaching Learning Materials, textbooks and notebooks, lack of safe drinking water facility and sanitation facility. The conditions of the government schools are also equally not good so far as quality of teaching, regular attendance of the teachers and use of Teaching Learning Materials are concerned.
The State Government has passed an Act named ‘Assam Venture Educational Institutions in 2011 (Provincialization of Services) Bill 2011’ paving the way for regularization of services of 95,000 school teachers in 16,000 venture schools. It is hoped that after proper implementation of the Act the condition of the venture schools is somehow improving and would improve in a better in future.

The project area being flood affected, it was found that out of the 20 schools selected for Back to Basics programme in 2014. 11 nos. of schools are affected annually by flood. During this period, schools remain closed for an average of one month. 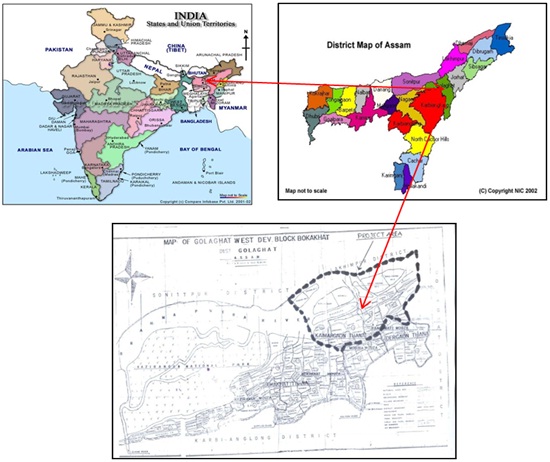